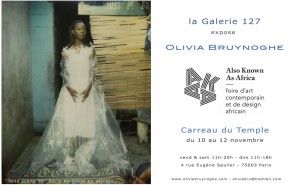 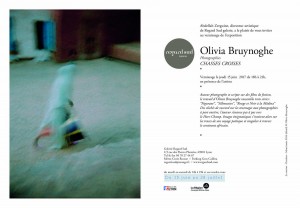 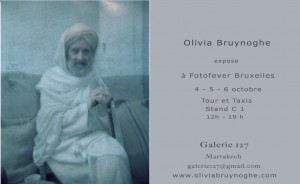 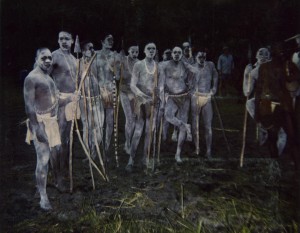 … « The first piece which caught my eyes in the fair is a tribal scene worthy of an anthropomorphic dream made by an operator from the 30’s, in a mission for National Geographic. Black, blue, bare bodies, spears, masks and feathers on black night background, a bride shot with a Polaroid or fixed gaze women in waiting times, Olivia Bruynoghe’s works are short stories or more precisely stories in the story. Script supervisor in feature films, she played with continuity shots and turned them into full photographs. I like to see a frame in a picture, which tells a story, and I’ve been moved by her slightly modest way of stepping aside in front of what she transforms into photography.

Her meeting with Nathalie Locatelli in the 127 Gallery was a trigger, and a very good example of the galerist’s work. Their collaboration began when Olivia Bruynoghe went to the gallery to show some black and white pictures. The galerist looked to all of them, gave a comment, and, as a good professional, grabbed from the bottom of the box an envelope with polaroids. She closely watched them and brought Olivia Bruynoghe, along the conversation, to get back to that let-aside work. This is the work shown here and now.”…